Update: Supporting Our Sailors at Sea 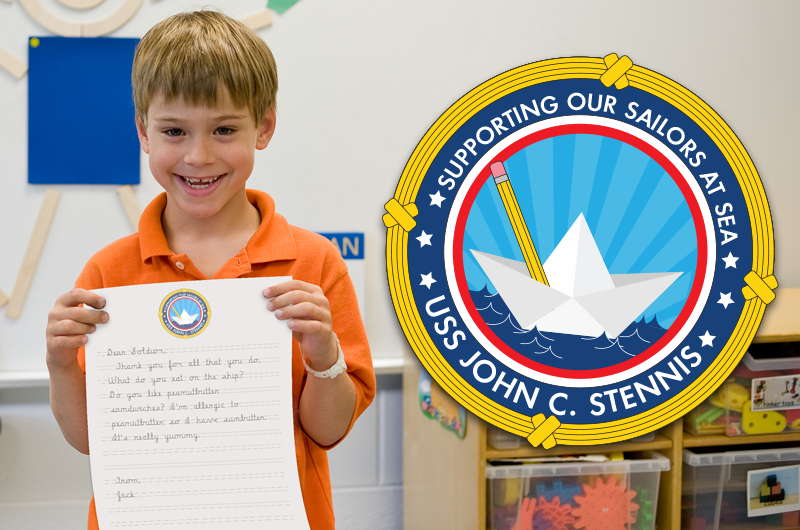 Learning Without Tears and the students who learn with us are celebrating our deployed service men and women. With the Supporting Our Sailors at Sea letter writing campaign, over 1,000 classrooms across the United States wrote letters to the sailors on the USS John C. Stennis. Today, the letters are still making their way to the ship since it takes almost two months for them to reach the ship in the Indian Ocean! While we are waiting, we asked some of the sailors a few of the most frequently asked questions. Here’s what they said:

What inspired you to be a sailor?

Ever since I was a child, I was fascinated by airplanes. I am not sure how this happened, but my father traveled a lot and I remember going to the airport with him, so maybe this triggered my passion. When I was in college, I became very interested in military aviation and decided that I wanted to join the Navy to be a Naval Aviator, as they were the ones who landed on aircraft carriers.

Do you have Internet?

Do you have pets on the ship?

You cannot have pets on the ship, but I did have my sister mail me a Sea-Monkey farm and I raised Sea-Monkeys!

What sea creatures do you see? Have you seen a pirate?

Occasionally, dolphins will swim in the wake of the ship, but not too often. We often fly looking around for modern day pirates and convince them that it is not worth it for them to try to steal anything from us or other ships.

How do you get food and supplies on a ship—especially all of those eggs?

Every few weeks we have an oiler ship pull up next to us and they pump fuel from their ship to the carrier with big hoses. Other times, we have supply ships bring food, mail, and supplies. They use their helicopters to take off from their ship and land on the carrier and then unload.

What do you do for fun?

How do you sleep on the ship?

Getting to sleep is important as we are always busy. I first slept in an eight-man room and then moved into a four-man room. We have bunk beds and a few sinks. The bathroom and showers are down the hall from our sleeping quarters.

This was a fascinating glimpse into life on the USS John C. Stennis. We're so excited for the students' letters to make it to the ship and to receive the sailors' responses!

By Elizabeth Feldman Elizabeth earned a B.A. in Government and Politics from the University of Maryland. After many years of marketing and project management consulting for companies including Blackboard, International English Language Testing System (IELTS), and Remote Learner, she is now with Learning Without Tears.

Sign up for our newsletter and get the latest updates, free downloads, and a special code for 10% off your first online purchase!