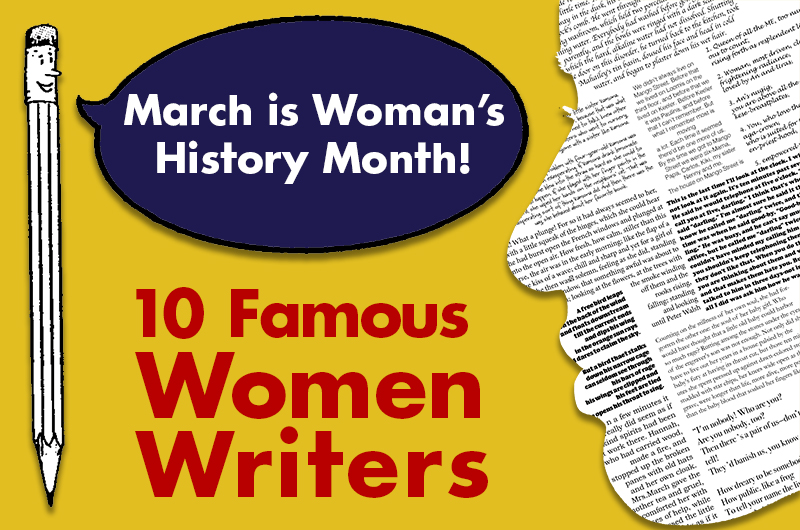 March is Women’s History Month and Learning Without Tears is celebrating 10 famous women writers whose writing is beloved by readers and esteemed by critics. From poets to children’s book authors—and even a writer whose script was carved into discs—we’re tipping our hats to these women’s phenomenal and often-revolutionary contributions to literature. To develop strong female writers in your classroom, check out our Building Writers student workbooks for independent writing practice!

Enheduanna was born in 2285 BCE. She was an Akkadian/Sumerian poet and the world’s first author known by name. Her poetry and psalms were used throughout the ancient world and were the basis for some of the genres still used in present day. Enheduanna wrote 42 poems about her personal frustrations and hopes, her religious devotion, and her response to war. In 1927, a British archaeologist found the Enheduanna calcite disc during excavations at the Sumerian site of Ur. The inscriptions on the disc identify the four figures pictured: Enheduanna, her estate manager Adda, her hair dresser Ilum Palilis, and her scribe Sagadu.

Maya Angelou was born in 1928 in Missouri. After a turbulent childhood, she moved to San Francisco with her mother and worked odd jobs before becoming a writer. As a young writer, she worked for newspapers in Egypt and Ghana. Her screenplay, Georgia, Georgia, was made into a movie, making her the first African American woman to have a screenplay made into a movie. She eventually published I Know Why the Caged Bird Sings about her childhood years, and went on to publish several more autobiographical works. She was awarded the Presidential Medal of Freedom in 2011.

Beverly Cleary grew up on a farm in Oregon before moving to Portland. She is noted for portraying the lives of children with both accuracy and humor. In 1984, she received a Newberry Medal for her book Dear Mr. Henshaw about a boy who writes to his favorite author to cope with his parents divorce. Her beloved character Ramona Quimby appears in a series about a spirited-but-exasperating girl growing up in Oregon. Cleary’s own twin children inspired her characters Mitch and Amy. In addition to her children’s fiction, she published two memoirs about her life growing up: The Girl from Yamhill and My Own Two Feet.

Willa Cather was born in 1873 in Virginia. She was born in Virginia and moved to Nebraska when she was nine. There, she was raised on the frontier among immigrants from Germany, Sweden, the Czech Republic, and Russia. Much of her work portrayed pioneers on the frontier in the Midwest of America. In 1922, she won the Pulitzer Prize for her novel One of Ours about the pioneer spirit.

Sandra Cisneros was born in 1954 in Illinois and is recognized for her literary portrayals of Mexican American life and for exploring race, class, and gender in her work. She is best known for her novel The House on Mango Street. In her children's book Hairs = Pelitos, Cisneros explores issues of human diversity using the different hair textures within one family. In 2016, she was presented with the National Medal of Arts.

Virginia Woolf was born in 1882 in London into a socially and artistically, well-connected family. She lived with her parents, three siblings, and four half-siblings. As a child, she spent her summers in a beach town called St. Ives, which inspired the setting for some of her writing. Her novels are considered influential because of their nonlinear format. Her fourth novel, Mrs. Dalloway, is widely regarded as her best work.

Louisa May Alcott was born in 1832 Pennsylvania and is best known for her autobiographical novel Little Women about four sisters in a family of modest means living in New England. Alcott volunteered as a nurse during the Civil War, but had to leave because she contracted Typhoid fever. Something positive came from this experience, however, when her letters were published in book form as Hospital Sketches. Her stories were published in The Atlantic Monthly. Alcott went on to publish several more novels including Little Men.

Toni Morrison was born in 1931 in Ohio, the second of four children in a working class family. Storytelling, songs, and folktales played a big role in her upbringing. She attended Howard University and Cornell University, later teaching at several universities and working as an editor for Random House. She debuted as a novelist in 1970, and in 1988, won the Pulitzer Prize for her novel Beloved about a runaway slave. Her use of fantasy, poetic voice, and mythical elements are central to her work. She was awarded the Presidential Medal of Freedom in 2012.

Emily Dickinson was born in 1830 in Massachusetts. She began writing as a teenager. Her work is significant because of its innovative use of form and syntax, including her signature em dash. She was a prolific poet, writing nearly 1,800 poems in her lifetime. However, only 10 of these were published while she was alive. She lived a reclusive life, rarely travelling. When she wasn’t writing she also studied botany and kept an herbarium. As an adult, she kept her family close: she lived with her sister in her childhood home, and her older brother and his wife lived in a house next door.

Dorothy Parker was born in New Jersey in 1893. She was known for her sardonic wit. She worked on the editorial staff of Vogue magazine, Vanity Fair, and The New Yorker. Parker won the O. Henry award for her short story “Big Blonde” about an aging woman who likes to party. Parker established a reputation as one of the best conversationalists in New York because of her sharp sense of humor. Later in her life she moved to Hollywood to work as a screenwriter and was nominated for an Academy Award for her writing for A Star is Born (1937).

By Megan Parker Megan Parker received her Bachelor of Science degree in English from Towson University. She has a background in writing for children that includes working in the editorial department at Girls’ Life magazine, where she wrote for the print magazine and website. She has versatile experience as a writer, editor, and copywriter, and her writing has been published in magazines and newspapers. When she’s not having fun creating imaginative content at Learning Without Tears, she loves to travel the world.